The Bank of Israel has approved the establishment of another new bank: “esh bank Israel”

The Bank of Israel has approved the establishment of another new bank: “esh bank Israel”

The Governor of the Bank of Israel and the Supervisor of Banks announced today that another new bank has received a bank license and permits to control a bank from the Bank of Israel.  This comes after the Banking Supervision Department completed the process of examining the initiative to establish another new bank, which will be called “esh bank Israel”
25/12/2022
Share:

Bank of Israel Governor Prof. Amir Yaron, and Supervisor of Banks Yair Avidan, notified entrepreneurs Yuval Aloni, Nir Zuk, Alex Liverant, and Adv. Alon Shine that the Banking Supervision Department has completed its examination for the establishment of another new bank.  Today, the Governor presented the entrepreneurs with a conditional license to establish a bank and the permits to control it. The process was conducted in consultation with the licensing committee. This is the second license issued to a new bank in the system within three years.

The control permits and conditional bank license will enable the entrepreneurs to move forward with the completion of computerization and the operational and regulatory preparations necessary to begin the bank’s operations, including the completion of the development and testing stages of the new technology. It will also allow them to complete hiring of further management staff and employees necessary to establish the bank, and build its policy, procedures, and processes in the bank’s main operational areas. The establishment of the bank should take about a year and a half.

Bank of Israel Governor Prof. Amir Yaron said, “The reforms and steps that the Bank of Israel has been leading in recent years to advance competition and innovation in the financial system now make it possible to establish another new bank. These processes take time, but also bear fruit. This is a prolonged process that we have been leading at the Bank of Israel in recent years, and we will continue to move forward at full strength. We attribute great importance to the entry of new banks and other participants into the Israeli banking system so that they can contribute to increased competition and innovation in the financial system. It is clear that this group of entrepreneurs is diverse, and brings with it strengths in various fields, including international technological and business experience. I would like to wish the group much success in establishing the new bank. The establishment of a new bank in Israel is a sign of trust in the Israeli economy and in the banking system and the supervision of the system.”

Prof. Shmuel Hauser, Chairman of the new bank, said, “We are excited to receive the bank license. There is a long road ahead of us.  What is unique about our bank is the synergy between technology and banking. This is groundbreaking Israeli technology that enables exceptional operational efficiency that will roll over directly to the customer.  This will be reflected in attractive interest rates, services with no fees, no subscription fees, and no preconditions such as transferring salaries.”

The conditional license and the permits were granted following a comprehensive in-depth process conducted by the Banking Supervision Department in the past two years to examine and challenge the business plan presented to the Department. The process included a Fit & Proper test relating to the honesty, integrity, and financial strength of the entrepreneurs, and guidance in the required regulatory preparations.

According to the business plan that the entrepreneurs presented to the Banking Supervision Department, they intend to establish a digital bank, without branches, based on innovative proprietary technology, and to focus on providing banking services to households and small and micro businesses, including providing credit, managing deposits, and providing advanced payment services.

The establishment of a new bank is possible due to a broad process in which the Banking Supervision Department removed barriers. Among other things, this included a change in the process of granting a bank license such that it would create a mechanism to ensure regulatory certainty for entrepreneurs even before full operational preparations are complete.

The new bank will be supervised by the Banking Supervision Department in order to ensure its stability and maintain depositors’ money, similar to the supervision of the other banks in Israel.  The new bank, like all other banks in Israel, will have access to all of the Bank of Israel’s liquidity tools (monetary loans and deposits).  In addition, the new bank will be able to manage an account at the bank of Israel and to connect to the various payment systems, which will enable it to provide all of the retail services that banks provide to their customers. 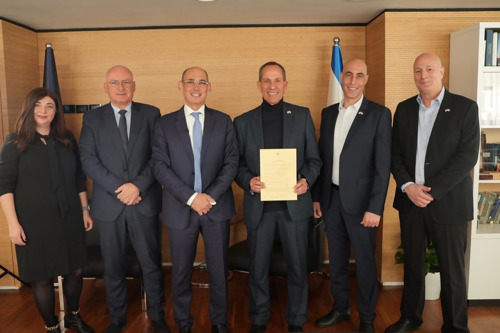